Home » News Item » Six months to Brexit: BCC survey finds investment and recruitment would be cut in the event of ‘no deal’

Six months to Brexit: BCC survey finds investment and recruitment would be cut in the event of ‘no deal’

With just six months to go before the UK leaves the EU, the British Chambers of Commerce is calling for UK ministers to redouble their efforts to reach an agreement with the EU – and ensure a transition period that could help firms prepare for change and prevent a slump in both investment and recruitment.

The British Chambers of Commerce (BCC), in partnership with independent business funder, Bibby Financial Services (BFS), has conducted one of the biggest surveys of business opinion since the referendum, amassing the views of over 2,500 firms from across the UK.

‘No deal’ will have real business consequences

Larger firms and those who are internationally active are the most exposed to the ramifications of ‘no deal’. 28% of firms with over 50 employees and 24% of those who export or import internationally say they would cut investment plans.

The fact that one in five businesses (20%) say in a ‘no deal’ scenario they would move part or all of their business to the EU27 is an important wake-up call – both on the need to agree an orderly exit from the EU and on the need for the UK government to enhance incentives for investment. 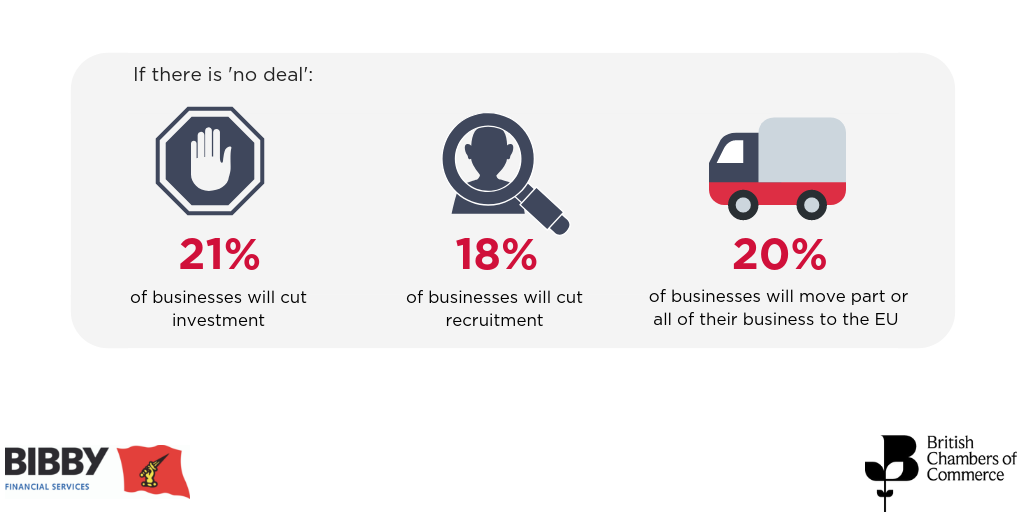 Dr Adam Marshall, Director General of the British Chambers of Commerce (BCC), said: “Businesses are clear that reaching a deal with the EU, which addresses the future terms of trade and provides certainty, must be the government’s number one priority.

“Our evidence is clear – failure to reach a political agreement would have real-world consequences, with significant decreases in both investment and recruitment. Larger firms and those active in international trade would suffer the most from a disorderly and sudden exit from the EU, but there will be impacts across the board.

“Most concerning of all, a materially significant number of businesses are considering moving part or all of their operations to the EU in the event of ‘no deal’. Government must act urgently and decisively to get a comprehensive deal done. They also need to use the levers they have, such as the upcoming Budget, to ensure they provide the right conditions for growth at home.”

Edward Winterton, UK CEO of Bibby Financial Services, added: “After more than two years of uncertainty, SMEs need answers over the future of the UK’s relationship with the EU. Specifically, they want clarity around the Customs Union, access to the Single Market and further detail on the practicalities of implementing this historic change. The consequences of a ‘no deal’ outcome could be disastrous for the 5.7m SMEs in the UK – particularly for those buying and selling goods within the EU.”

Businesses are unprepared for Brexit

The survey also highlights a concerning lack of Brexit preparation. According to the findings, 62% of UK firms have not done a risk assessment of the impact of Brexit to their business. The figures reflect a huge disparity between the preparations of the largest companies and their smaller counterparts. 69% of micro firms (those with 1-9 employees) have not completed an assessment, compared to 24% of firms with over 250 employees.

With six months to go until the UK leaves the EU, the BCC has found that many SMEs are either awaiting more clarity before they act, or are suffering from ‘Brexit fatigue’ and have switched off from the process because they don’t believe they will be affected. The BCC has created a checklist to help firms consider the changes Brexit may bring to their own firm, customers and suppliers, and to help them plan ahead. Accredited Chambers of Commerce stand ready to support them through the process. 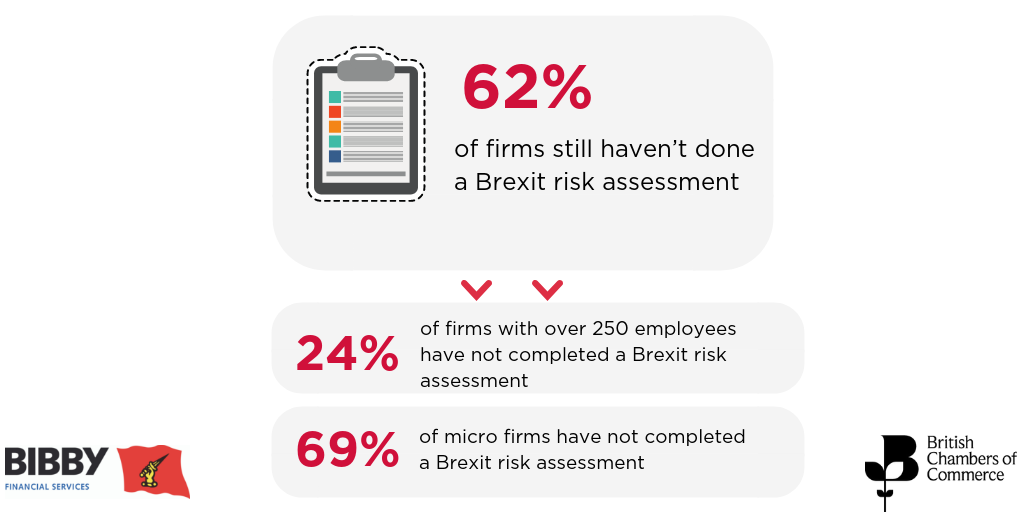 Adam Marshall added: “Too many businesses across the UK are still not ready for Brexit. Many smaller firms don’t have the capacity to scenario plan, don’t think they’ll be affected, or have simply switched off from the process altogether.“With six months to go until the UK’s planned departure, firms still don’t have answers from government to the most basic questions about future trading conditions. The BCC continues to track progress on the key business issues and our risk register shows sufficient progress has been made on only a handful of issues. With so much still unclear, a transition period is vital to allow all firms the time to acknowledge and prepare for change.”Edward Winterton, UK CEO of Bibby Financial Services, said: “The businesses we work with tell us that they simply don’t have enough information to enable them to prepare for any of the potential outcomes of Brexit. This could negatively impact sales performance and output in the final quarter of the year, which is typically a peak trading period for many businesses throughout the country.”